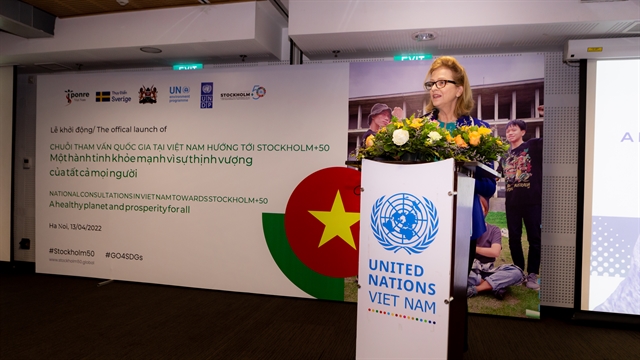 UNDP Resident Representative in Việt Nam, Caitlin Wiesen, gave a speech at the workshop for the official launch of the Stockholm+50 National Consultations in Việt Nam on Wednesday. — VnExpress News Photo Thu Hằng

HÀ NỘI —  A national consultation process in Việt Nam ahead of the Stockholm+50 conference, organised by the Institute of Strategy and Policy on Natural Resources and Environment (ISPONRE) and the United Nations Development Programme (UNDP) with the support of the Swedish and Kenyan governments, opened in Hà Nội on Wednesday.

The consultations in Việt Nam will examine national challenges and opportunities for stepping-up climate action and bringing the views of the Vietnamese people to the global stage on crucial challenges the people and the planet are facing. Việt Nam is one of 58 countries to organise multi-stakeholder national consultations to inform discussions at the global conference.

The UNDP will conduct a series of national consultations in Việt Nam in collaboration with partners.

“The consultations will grapple with three questions: First, what nature-based solutions will reverse dangerous environmental trends in Việt Nam, and secondly, what actions will ensure a green and just energy transition that creates sustainable opportunities to lift millions out of poverty. And thirdly, which leveraged actions would accelerate a circular economy and address unsustainable consumption patterns as Việt Nam realises its full economic potential,” said Wiesen.

The workshops promote concepts related to climate change and sustainable environment-friendly solutions, which will be discussed at the Stockholm +50 conference slated for June.

The upcoming conference will mark the 50th anniversary of the United Nations Conference on the Human Environment, which aims to create a global vision to make the planet healthy and prosperous.

It also aims to help the world recover from the COVID-19 pandemic and speed up the implementation of the Sustainable Development Goals.

Assoc Prof. Nguyễn Đình Thọ, Director General of the Institute of ISPONRE, said the earth was suffering many serious impacts due to degradation, environmental pollution, climate change and sea-level rises.

“Recently, the government of Việt Nam has made strong commitments to and determination for protecting natural resources and environment and responding to climate change, thus contributing to the global joint effort to develop a circular economy towards net-zero emissions,” Thọ said.

Ambassador of Sweden to Việt Nam Ann Måwe said: “‘The future is common. We must share it. We will create it together.’ Those are the words of late Swedish Prime Minister Olof Palme, still echoing today 50 years after he said them.”

“Stockholm+50 aims to substantially contribute to accelerating the necessary green and sustainable transition. Time is running out, and the global challenges we face must be met with a collective response that drives action on the ground.”

Việt Nam is not an exception; re-occurring floods and pollution show how climate-induced risks are affecting Việt Nam.

The ambassador said that the country was one of those most impacted by climate change.

In addition, Việt Nam is home to over 50,000 species of plants and animals and is among the 16 most biodiverse countries globally. However, several factors are destroying this biodiversity, including population growth, resource overexploitation, and agricultural expansion.

Việt Nam has an opportunity to be a regional and global leader in a necessary transition towards sustainability and climate neutrality. The ambitious commitments presented by Prime Minister Chính at COP26 in Glasgow, including a net-zero emission target by 2050, were an important step, she said. — VnExpress News