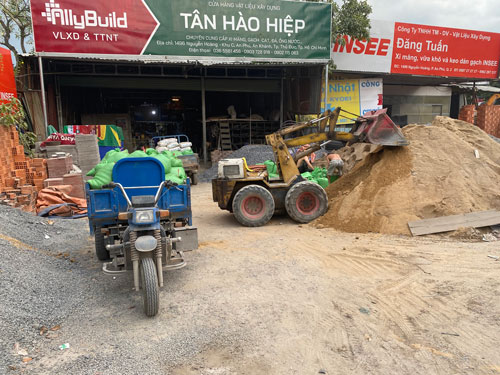 Prices of building materials and interior decoration have all increased.  — Photo nld.vn

HÀ NỘI — With local construction contractors recovering after the heavy impact of the pandemic, the increased prices of building materials and the labour costs have a significant effect on their performance.

In recent days, steel manufacturers have continued to send notices of higher prices of all types of finished steel to customers.

According to the announcement of Vinausteel Company, from March 5, 2022, it increased the selling price of rebar and coil to VNĐ400,000.

On the same day, Việt Đức Steel Production Joint Stock Company announced the same for its customers in the North and Central markets.

Not only steel, but price of many other construction materials such as sand bricks also increases.

Previously, the seller of materials always shipped to customers, but now due to the high price of gasoline, the store requires buyers pay shipping fees

Tiến said the steel price has increased to reach VNĐ20 million per tonne and believed their prices could rise in the near future when gasoline prices increase sharply, leading to increased freight rates.

A representative of the Vietnam Association of Building Materials told local media that due to the sharp increase in input costs, especially the skyrocketing price of gasoline, businesses had to increase their selling prices.

Thái Duy Sâm, Vice President and General Secretary of Vietnam Building Materials Association, said: “Even with construction bricks, some manufacturers have just announced plans to increase the selling price by at least VNĐ100 per piece compared to the end of 2021.”

The Vietnam Steel Association (VSA) believes that construction iron and steel prices tend to increase because the cost of imported materials is relatively high.

Some experts have said that the Russia-Ukraine conflict could cause a supply shortage and increase steel prices because Russia currently accounts for about 10 per cent of the world’s steel supply, while Ukraine is about 4 per cent.

In this situation,  a construction contractor in Thanh Hóa Province said that the business’s activities were strongly affected. He said the price of construction materials increased, labour costs also increased, making the construction of new projects difficult.

As most of the new projects signed were estimated from the end of last year when the input prices had not fluctuated, his company had signed a fixed price package, and he now faced many difficulties.

At the same time, a representative of 207 Construction Joint Stock Company said that due to the general influence of the market, the high price of building materials had a significant impact on contractors’ business performance.

“Even for bidding packages implemented under an adjusted price contract, according to the coefficient announced by the local Department of Construction, the prices adjusted have followed the market,” said a company representative.

According to the Head of Market Planning Department of Vicem Hoang Thach Cement Company, the company has not adjusted the selling price of cement, but the company was struggling as the input costs for all production and business activities increased.

Currently, coal for cement factories has also increased in price, not to mention transport costs have also risen sharply due to high gasoline prices.

He told local media: “If the situation of production costs continues to escalate beyond the tolerance of businesses, we will certainly have to increase the selling price.”

Từ Tuấn Thành, director of Minh Tiến Residential Construction and Repair Company (HCM City), said that the price of materials had increased continuously during the past year, coupled with the pandemic situation and a lack of workers.

Thành said the situation forced him and many other companies in the same industry to increase the raw construction price by about VNĐ1 million per sq.m to VNĐ5-VNĐ6 million each sq.m, making the finished cost increase to VNĐ8-9 million per sq.m.

According to the Indian based research firm Mordor Intelligence, Việt Nam’s construction market was valued at around US$60 billion in 2021, and the market was projected to register a growth rate of more than 8.71 per cent during the forecast period (2022-27).

The firm said the country’s construction industry was one of the best performing in the Asia-Pacific region, adding despite losing momentum due to COVID-19, it had continued to grow strongly in 2021. — VnExpress News