HÀ NỘI — Deputy Prime Minister Phạm Bình Minh on Wednesday affirmed that climate change response was an area of strategic cooperation between Việt Nam and the US.

It is also a key, urgent task of the Vietnamese Government to shift towards a green, circular, low-carbon development model, Minh told US Special Presidential Envoy for Climate John Kerry, who is on a visit to Việt Nam from February 22-25.

The Deputy PM called on Kerry to further support the US to increase its financial and technical assistance to Việt Nam, helping the country fulfil the commitment of net-zero emissions by 2050 made at the 26th United Nations Climate Change Conference of the Parties.

Minh noted the progress in the Việt Nam-US comprehensive partnership across spheres, with two-way trade reaching US$111 billion last year.

He thanked Kerry for his efforts and contributions during the normalisation and enhancement of Việt Nam-US ties over the past decades.

The Deputy PM suggested the two countries foster their cooperation in the time ahead to promote bilateral ties in a stable, long-term, pragmatic and effective manner.

He also thanked the US government for its donations of 29.1 million doses of COVID-19 vaccine to Việt Nam, and appreciated the US commitments to increasing funding to deal with war consequences in the Southeast Asian nation.

Minh suggested the US continue its assistance to Việt Nam in areas such as education-training, health care, humanitarian affairs and digital economy.

In reply, Kerry reiterated the US commitments to respecting Việt Nam’s political institutions, independence, sovereignty and territorial integrity, and stressed that the US attached importance to the comprehensive partnership with Việt Nam and wished to advance it to a new high in the time ahead.

Speaking highly of Việt Nam’s commitment to net-zero emissions, he said the US would continue to enhance cooperation and assist developing nations, including Việt Nam, in climate change, particularly in clean energy development, infrastructure, and the management of water and other natural resources.

The US will step up projects on settling war consequences, including one on dioxin contamination remediation at Biên Hòa airbase in the southern province of Đồng Nai, while intensifying collaboration with Việt Nam in education-training, development, and science-technology, he said. 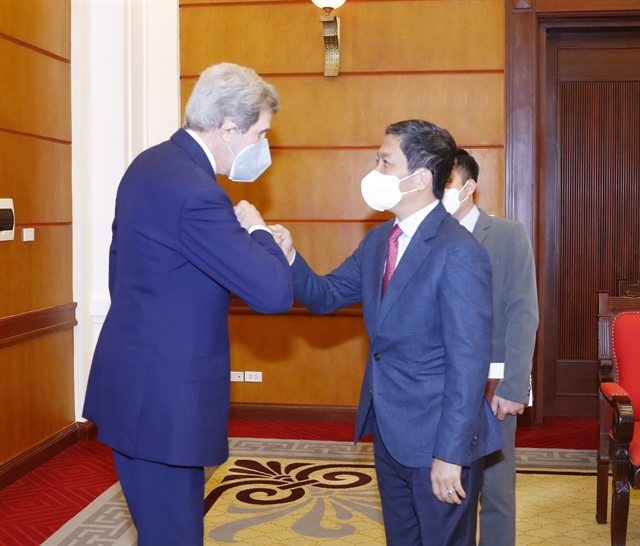 The same day,  John Kerry also had a meeting with Politburo member and head of the Party Central Committee’s Economic Commission Trần Tuấn Anh, where he stressed that the US stood ready to support Việt Nam in renewable energy development.

Việt Nam has great potential and advantages in clean and renewable energy development, Kerry said, while speaking highly of the country’s policies and achievements in this sphere.

He said that the US attached importance to the comprehensive partnership with Việt Nam, and expressed his belief that the good relationship would grow further.

Tuấn Anh praised Kerry’s contributions to the multi-faceted cooperation between Việt Nam and the US and appreciated the resolve of President Joe Biden’s administration to promote global efforts on the climate crisis response.

Tuấn Anh affirmed the Vietnamese Party’s and State’s determination to adapt to climate change and fulfil its international commitments.

He called on the US Special Presidential Envoy for Climate to make more contributions to planning and implementing US policies on climate change response globally, and in Việt Nam. — VnExpress News