Citizens have much joy in new houses in border areas 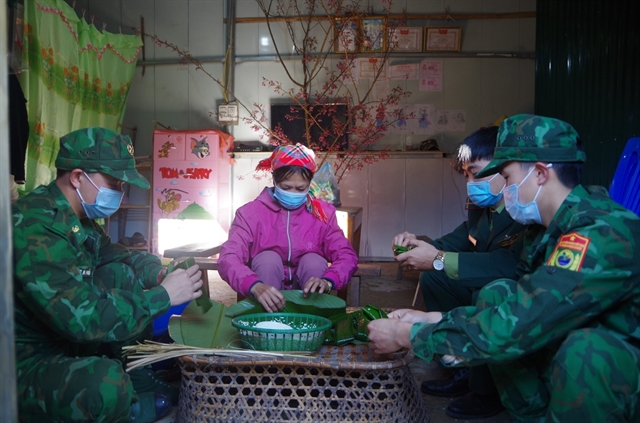 LAI CHÂU — Thanks to the Lai Châu Border Guard Command, many spacious houses have been built to help poor residents settle down.

Lai Châu is a border mountainous province with 20 ethnic groups, where ethnic minorities account for more than 85 per cent of the population.

For many residents, the thought of having their own house is a distant dream, as often people can’t even afford three meals each day.

Therefore, the houses presented by the provincial Border Guard with financial support from different organisations have warmed local people’s hearts.

This spring is the most memorable Lunar New Year festival for families whose houses were built by the provincial Border Guard.

They enjoy Tết with family in a solid and spacious house. It is not only the poor residents’ joy, but also the happiness of the Border Guard soldiers who have worked hard for more than a year to fulfil the dreams of locals.

Before the Tết holiday, the Border Guard also came to clean the house helping her family to welcome the New Year in style.

Seeing the house which she dreamed of for a long time, Sén was touched.

She told the Vietnam News Agency that her husband had died and she raised six children alone, so her family was very poor.

Her old house was built a long time ago and was in disrepair. All activities of her family such as cooking and sleeping are done in a very narrow space. Whenever it rains, mother and children dare not sleep because the house is dilapidated, and the winter is severely cold.

Now with support from the Party, the State and especially the soldiers to build a solid house, she is very happy.

Lì Xé Nu in Tá Bạ Village is no longer anxious when it is raining and cold like in previous years.

Nu said that before, his whole family with five children lived in a house in poor state of repair. Having a new house built by the Border Guard, his family is very touched and grateful.

Lieutenant Colonel Phùng Nhù Giá, commissar of the Ka Lăng Border Station under the Lai Châu Border Guard, said in the past, the station assigned officers and soldiers and asked for financial support to help poor people build new houses.

In order to ensure the progress and hand over the new houses before the Lunar New Year, the soldiers worked all day regardless of holidays and breaks to try to complete it, so that the people can have happier new year.

Over the past year, implementing the project “Supporting poor households with housing difficulties in Mường Tè District, Lai Châu Province”, with the financial support of many sponsors, the provincial Border Guard has built and repaired more than 100 houses.

Newly built or repaired houses have brought joy, happiness and opened up new lives for many poor families.

The work has not only helped ensure social security, but also created a close and warm relationship between the army and the people.

Colonel Lê Công Thành, deputy political commissar of the Lai Châu Border Guard, said that in the future, the provincial Border Guard would continue to direct units and local authorities to review and survey the current situation of the locals’ houses. It would actively co-ordinate with agencies and organisations to implement programmes supporting poor people in the border areas.

The new houses are meaningful gift which not only helps local people have a more stable life, contribute to economic development, but also strengthens people’s confidence in the guidelines of the Party and the State and the solidarity spirit of Vietnamese people. — VnExpress News