China’s Chen Guxin won the BRG Open Golf Championship Da Nang on Friday after finishing with a total of eight under par.

In the 18th and final hole he scored a par to win from Filipino Lloyd Jefferson Go who finished second.

Chen had entered the event, part of the Asian Development Tour (ADT), ranked 403rd in the world, but took home a trophy and prize money of US$13,125.

The tournament was played at the BRG Da Nang Golf Resort, a course designed by golf legend Jack Nicklaus with 18 holes and a standard par of 72.

The tournament attracted 115 golfers, including 40 from Vietnam.

Only five of the local players made the cut of +7 after the first two rounds to advance to the final round.

Doan Van Dinh and Nguyen Huu Quyet finished the event with +10 over par, the best result in the domestic group. 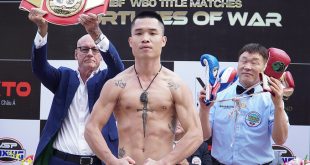