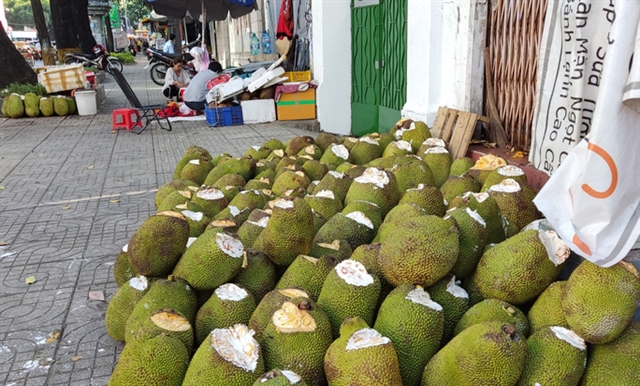 Fruits that cannot be exported are sold cheaply on the streets of HCM City. —Photo nld.com.vn

HCM CITY — The Government and businesses should have a sustainable strategy to promote the domestic market and find other markets to consume farm products that cannot be exported to China.

Thousands of tonnes of agricultural produce are currently held up at the China border, because China strengthens COVID-19 prevention measures.

Nguyễn Bình Phương, deputy director of the Thủ Đức Wholesale Market Company, which runs the namesake HCM City market, said the volume of goods exported to China was very large to be transferred to the domestic market.

Nguyễn Quốc Trịnh, chairman of the Long An Province Dragon Fruit Association, said the province’s annual output of the fruit was 400,000 tonnes, and with exports to China becoming difficult in recent times, it was necessary to promote domestic consumption.

It had urged authorities to step up promotion to help find customers elsewhere, especially in India, and develop the domestic market through supermarkets to reduce dependence on China.

Farmers needed to convert to a farming model based on VietGAP and GlobalGAP standards to be able to export to choosy markets like Japan or EU, he said.

The EU has large demand for agricultural produce and, thanks to the EU-Việt Nam Free Trade Agreement, Vietnamese businesses have a unique opportunity to take advantage of this, but they need to strictly comply with European regulations to avoid losses, according to the chairman.

The EU has strict requirements and regulations for food products in terms of quality and pesticide residue levels.

But dragon fruit growers have not converted from traditional farming methods to VietGAP and GlobalGAP standards because output is still unstable and produce do not fetch much higher prices though costs are much higher.

“A value-added tax of 7 per cent applies to goods exported via official channels.”

He said local authorities should establish information centres at agricultural zones to communicate with the Chinese market, gather information about it and disseminate it to farmers to ensure production is in line with demand.

Firms should shift their focus to processing to expand their global footprint and become less dependent on fresh exports, he added. — VnExpress News