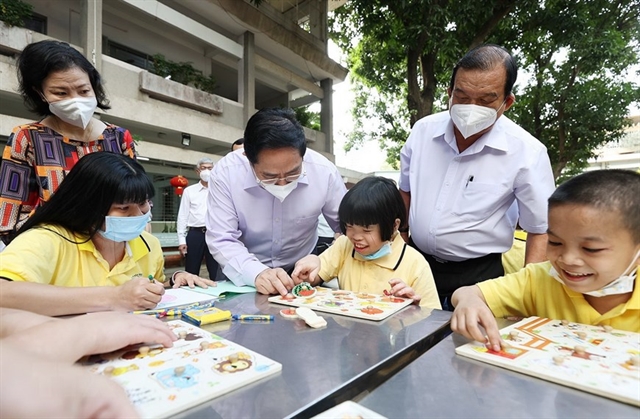 The inspections will take place nationwide over the course of the year.

The ministry will assign localities to supervise establishments that raise poor children, orphans and homeless children. The ministry will report the results to the Government and develop a resolution based on their findings.

The move is part of efforts to curb the rise in incidents of child abuse and violence in the past two years.

The latest report by the National Child Helpline 111 revealed that child abuse and violence in 2021 was significantly higher than in 2020.

The centre has intervened and handled 625 cases during 2021.

Among those cases, up to 75 per cent was children suffering from domestic violence. School bullying cases decreased as schools were closed because of the COVID-19 pandemic.

However, the centre said the problems of school bullying would likely increase with many schools reopening.

Nguyễn Thuận Hải, who is in charge of the National Child Helpline 111, said that one of the difficulties they face was information supply and timely intervention from localities.

She said: “Our system has a database to connect to officials of local Labour, Invalids and Social Affairs office, the grassroots people’s committees, local police, and the youth union.

“However, we have to contact four or five lines at the same time to have intervention and support for children as the working capacity of staff at the grassroots level is still limited.”

Đặng Hoa Nam, director of the Department of Children said many recent child abuse cases were caused by caregivers or guardians.

An eight-year-old girl in HCM City’s Bình Thạnh District was abused so badly by her father’s fiancee last December that she died. An investigation later revealed that the little girl had been repeatedly beaten and made to do chores by the woman. The woman is under investigation for the charge of murder.

In another case, a three-year-old baby girl was found with nine nails embedded in her skull after she was brought to a general hospital in Hà Nội. Further investigations revealed she had been hospitalised four times for pesticide poisoning, broken arm, and a nose injury in the last three months. The mother’s boyfriend is under investigation.

Nam said these cases were difficult to discover if relatives or people living nearby didn’t contact the authorised agencies. This problem needed to be studied carefully to ensure the safe nurturing environment for children, he said.

He said: “It is necessary to take prevention as the main priority, focusing on education on child protection laws for the public. A healthy, safe and friendly environment for children must be created. Children’s homes, schools and child support establishments must be the safest place.

“Early detection and timely intervention are vital when a child faces a risk of child abuse and violence. It is necessary to inspect and promptly handle all cases at the earliest time.”

He also said education must be enhanced and implemented in a more innovative way, focusing on children’s rights education. The ministry would co-ordinate with the Ministry of Education and Training to print the helpine 111 on the cover of books, toys, and milk bottles to make it easily reached.

The ministry would research to have guiding documents on child abuse prevention and control, which was consistent with the Law on Children, he said. It would continue to consolidate child protection work in a streamlined and efficient manner, ensuring that there are human resources in charge of children’s work in grassroots authorities, especially at the commune level to take care of children’s mental health and psychosocial wellbeing. — VnExpress News