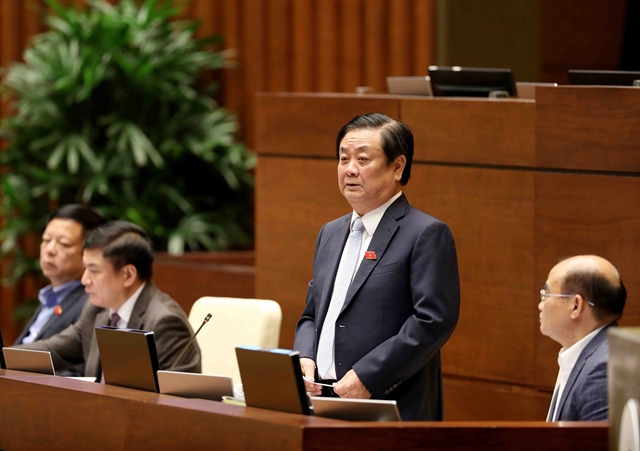 HÀ NỘI — Minister of Agriculture and Rural Development Lê Minh Hoan said that it is necessary for the nation to shift from agricultural production to an agricultural economy.

This is a strategy for the sustainable development of the sector, Hoan said during the question-and-answer session with the legislators, as part of the ongoing third meeting of the National Assembly.

The topics of discussion included agricultural production, trade policies and frameworks, and negotiation and market development for these products.

Acknowledging that the export value of the sector reached a record US$48.6 billion in 2021, he hopes that the entire country could participate in the collective economy and restructure the market and production process, contributing to a shift in thinking and positioning the brand of Việt Nam’s produce on the global stage.

Answering questions about export congestion at the border gate between Việt Nam and China, the minister said the authorities had taken actions to minimise losses for farmers. However, the situation was inevitable due to the differences in pandemic control between the two countries.

Hoan also confirmed that the Chinese market was shifting towards stricter regulations and standards in food safety. The Ministry of Agriculture and Rural Development (MARD) was working with the Ministry of Foreign Affairs to develop a project on obtaining official quotas for this market.

The MARD also took responsibility for its shortcomings in regulating and standardising agricultural produce, said Hoan. The minister was now assigning research institutes to create frameworks for agricultural production to reduce input costs.

“Countries around the world are aiming their agricultural sector towards ‘less for more’, which means optimising expenses and maximising profits through agricultural science, and we too must strive towards this direction,” said Hoan.

In regard to the application of advanced technology in the sector, the minister said that there had been policies and plans in place for hi-tech agricultural zones, businesses and products. However, they had not been as effective as expected due to a shortcoming in resources.

He also added that in a connected economy, in addition to accumulating land for better production areas, it was necessary to have ‘soft’ strategies for agricultural land that fit the local conditions, in which the government and society join hands to invest and develop hi-tech agricultural zones.

The MARD also believes that the sustainable development strategy for fisheries is to reduce exploitation and increase cultivation, as the reserves are no longer as abundant as before.

In response to questions on the low purchase prices for farmers despite the high price tags abroad, Hoan explained that agricultural exports must take into consideration the huge expenses of transportation and logistics.

He added: “If we want to build a brand of our products abroad, then we must build the brand in the domestic market first.

“Confidence in agricultural products in the country will be the basis for export to the world.”

Taking the leaders Bắc Giang, Hưng Yên, Hải Dương and other provinces as examples of their efforts to promote their local produce, Hoan said that these localities had been able to find a market despite the COVID-19 outbreak last year.

The question-and-answer session will continue with other ministers and the state bank governor until Thursday. — VNS