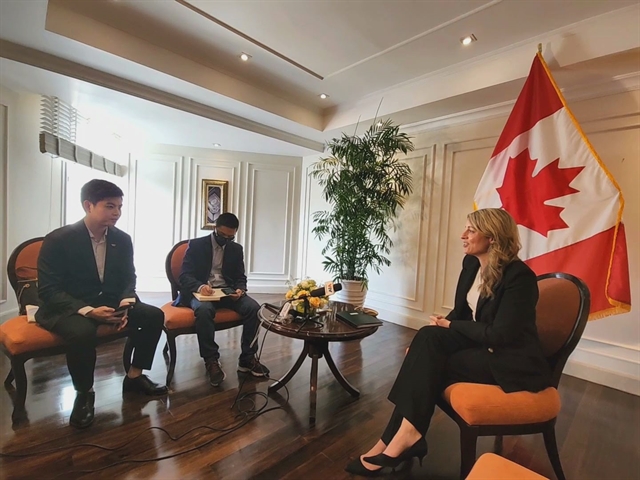 Canadian Minister of Foreign Affairs Mélanie Joly during the interview with Vietnamese media on Thursday as part of her visit to Việt Nam. — VnExpress News Photo Trọng Kiên

HÀ NỘI — Canadian Minister of Foreign Affairs Mélanie Joly yesterday said that Việt Nam is part of the “top list of strategic partners” to Canada’s Indo-Pacific strategy, slated to be announced in the summer.

During a press briefing with local media as part of her two-day visit to Việt Nam, Joly noted that Canada is asserting itself more in the Indo-Pacific region with an emphasis on development and trade.

“We want to reinforce Việt Nam, also in ASEAN, in the multilateral form of ASEAN. We believe that, as a country, Canada must respect the approach, which is by and for members of ASEAN, we’re not there to impose our vision. We’re there to work with Việt Nam, to work with ASEAN countries. And we think it’s the best way to make sure that there’s stability in the region, and that stability will help economic development and trade,” the Canadian diplomat stressed.

Việt Nam and Canada have had a strong relationship for the past 50 years, but there is more to be done to increase diplomatic ties, increase trade, education and tourism, Joly added.

Another area of cooperation the Canadian official underlined is climate change, especially how Canada can help Việt Nam with its transition to a carbon-neutral state by 2050.

“First, we can provide raw materials that are really important to clean technology, like rare earth and minerals. The second is provision of energy for the transition period, maybe liquefied natural gas (LNG) or hydrogen or wind power projects. […] And the third thing is really making sure we can provide the financing for very important clean energy projects,” she said, adding that this would not only be good for Vietnamese and Canadian people, but also the world since climate change impacts the entire planet.

In response to questions on how the COVID-19 pandemic has shaped bilateral relations, Joly said it was an utmost priority for both countries to make sure that the people were safe and that our healthcare systems had the capacity to deal with outbreaks, which resulted in halts to tourism and the movement of people.

“We’ve been supporting Việt Nam in different ways, particularly through vaccine passports. But we want to make sure that we do more, the Prime Minister and I had a long conversation about that as well,” she noted.

Regarding the facilitation of Canada’s recognition of Vietnamese vaccine passports, Joly said she would address this with the Canadian Minister of Immigration that is in charge of this issue, to make sure that at least people can travel again, and families can see each other.

With regards to new emerging global issues, the Canadian foreign minister noted that “Việt Nam, like Canada, is a strong middle power. We both are next to superpowers. And so we understand each other.”

“Canada has been for 50 years, very much involved in Việt Nam’s development on the social side, but also on the economic side. And we want to make sure that we continue that trusted relationship, particularly at a time when there are global events that are creating a lot of instability in the world,” she said, referring to the war happening in Ukraine.

She said Canada wants to make sure that instability in Ukraine won’t have an impact around the world, including Southeast Asia, and her presence here is to ensure “we continue to be strong together, and that we can find solutions for the future to keep the stability in the region.”

During Wednesday’s “many discussions” with Vietnamese Prime Minister Phạm Minh Chính and foreign minister Bùi Thanh Sơn, she said Việt Nam and Canada both agree that the principles of sovereignty and territorial integrity are extremely important.

With regards to the differences between Việt Nam and Canada in approaching the Russia-Ukraine conflict, she said: “Now, I don’t come from a country that has gone through war, Việt Nam has gone through war. So, in that sense, I’m extremely empathetic towards the Vietnamese people that have gone through these difficult experiences. But I think the question of Ukraine is something that we need to continue to address as the work continues and diplomacy is fundamental in making sure that the war stops.” — VnExpress News