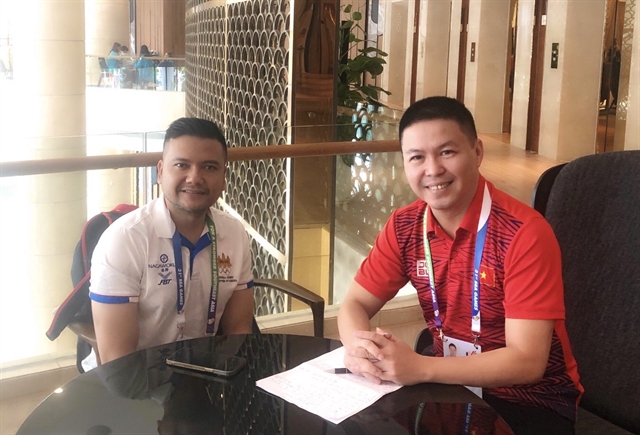 Next year, Cambodia will, for the first time, host the 32nd SEA Games. Nhan Sokvisal, Chief de Mission of the Cambodian delegation talks to our SEA Games 31 Bulletin about the ongoing SEA Games and Cambodia’s preparation for the historic SEA Games 32.

What do you think about Việt Nam’s organisation of this year’s SEA Games?

Việt Nam has shown a sense of responsibility and made the best efforts to host the 31st SEA Games as planned when all countries, including Việt Nam, have suffered a lot of negative effects from the COVID-19 pandemic. In general, I think Việt Nam has tried its best to organise this special Games.

The members of the Cambodian delegation and I witnessed the organisation in locations and the enthusiasm of the audience. Everything was great.

However, the movement between competition venues is not really convenient because SEA Games 31 is held in many places.

As the leader of the team, sometimes I have to adjust my plans to be able to be at the competition venues.

Actually, I understand that Việt Nam wants to widely promote this festival to many localities, thereby creating a driving force for development.

What do you think about the achievements of teams at the SEA Games?

I think Việt Nam will definitely rank first in the medal tally because you are good in many different competitions. Cambodia so far has won only two gold medals, but I believe my team will reach the minimum target of five gold medals. First of all, this event is a very good opportunity for sports delegations to compete, exchange and prepare for the next targets, including Asiad 19 in China and the 32nd SEA Games which will be held for the first time in our country next year.

Is Cambodia preparing well for the 32nd SEA Games next year?

It’s true. The 32nd SEA Games will be the first time in history that we have the honour of hosting the regional Games. Cambodian people are extremely excited and looking forward to the festival.

The 2023 SEA Games Organising Committee (CAMSOC) has received the direction and close supervision of the Government, especially Prime Minister Hun Sen. The preparation for more than 40 sports has been completed.

To prepare for the hosting of the 32nd SEA Games, CAMSOC has sent hundreds of officials from many different sub-committees to Việt Nam this time to visit, learn and gain experiences for the next event. After the 31st SEA Games, we will all together analyse and adjust the overall plan from what has been learned from Việt Nam to well organise the 32nd SEA Games next year. VNS