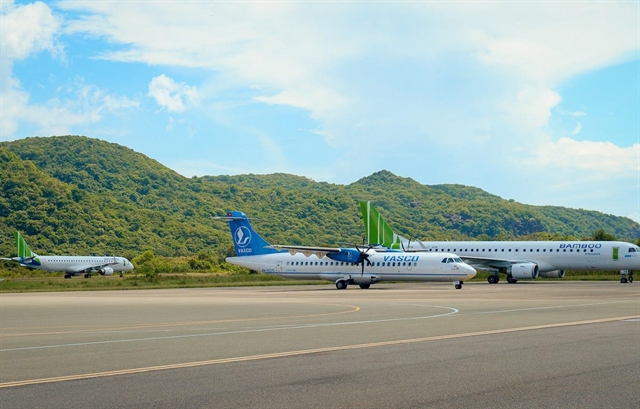 HÀ NỘI — The Civil Aviation Authority of Vietnam (CAAV) has proposed to the Ministry of Transport three investment options to upgrade Côn Đảo Airport, in the southern province of Bà Rịa-Vũng Tàu.

If the airport is invested in and upgraded, it will be able to receive larger aircraft, bringing efficiency in operation, promoting socio-economic development and tourism in the Côn Đảo Island District.

According to the ministry-approved planning, in the period to 2030, it is necessary to synchronously implement four component projects; runways and taxiways (invested by CAAV); flight management works (expected to be invested by Vietnam Air Traffic Management Corporation); aircraft aprons and passenger terminals (to be invested by the Airports Corporation of Vietnam – ACV) and aviation petroleum storage, deployed in the form of investor selection according to the provisions of law.

However, from 2021 to 2025, ACV has not yet planned to invest in the construction of passenger terminals, aircraft aprons and technical infrastructure at Côn Đảo Airport.

Côn Đảo Airport is currently only operated by Vietnam Airlines and Bamboo Airways with ATR72 and Embraer E195 aircraft.

On May 12, ACV’s Board of Directors submitted the plan for 2022 to the Committee for Management of State Capital at Enterprises about the passenger terminal and aircraft apron project at Côn Đảo Airport.

Option 1: ACV will invest in aircraft aprons, passenger terminals and infrastructure, according to the approved planning for the period 2022-2025. CAAV invests in upgrading runways and taxiways. VATM will invest in flight operations assurance systems. Aviation petroleum storage will be called for investment by the Ministry of Transport.

Option 2: ACV does not invest in the above works in the period of 2021-2025 and the entire airport is taken under government ownership. The Ministry of Transport shall report to the Prime Minister for approval of the socialisation of airport infrastructure.

Option 3: CAAV proposes the construction of a passenger terminal and aircraft apron are publically funded.

CAAV recommends the first option and proposes the Ministry of Transport works with the Committee for the Management of State Capital at Enterprises to soon approve the investment plan of ACV in the 2021-2025 period.

CAAV also proposes to adjust the kick-off plan of the runways and taxiways project. The preparatory work will be done in 2022, selecting a contractor in 2023 and completing the project in 2024. VNS