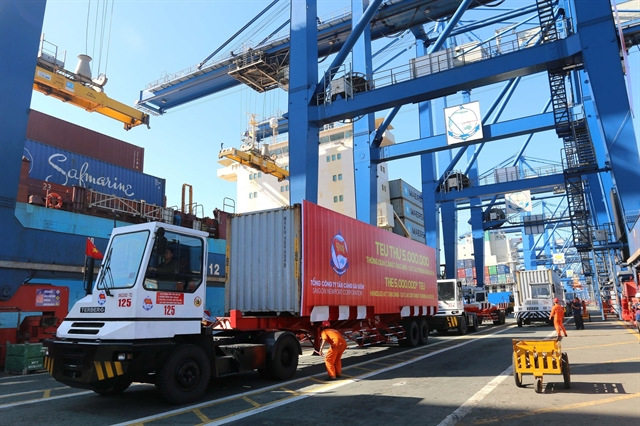 HCM CITY — Business associations have proposed that the Prime Minister ask HCM City to stop the collection of infrastructure fees at seaports.

The Private Economic Development Research Board also sent the proposal to the PM, saying the move could create favourable conditions for businesses and the economy to recover and develop.

The board has pointed out that the proposed fees are high and it is “not the right time” for the collection plan. It causes negative impacts on the operation of businesses and the Government’s economic recovery and development programme.

The fee also reduces investor belief and increases production costs that make it difficult for businesses to recover and compete, and reduces the attractiveness of investing in the region.

Under the document No. 43/TB-UBND, from April 1, the city began to collect infrastructure fees at seaports.

For goods imported for re-export or deposited in bonded warehouses and for transit, and transhipment goods, the fee is VNĐ50,000 (US$2.2) per tonne for liquid and bulk cargo, VNĐ2.2 million for a 20-foot container, and VNĐ4.4 million for a 40ft container.

The original plan was to start collecting the fees last July, but the pandemic forced a delay.

In early March, many industry trade groups called on the city to put off the fee collection plans until the end of the year, saying businesses were dealing with severe problems like rising fuel prices and broken global supply chains. — VnExpress News