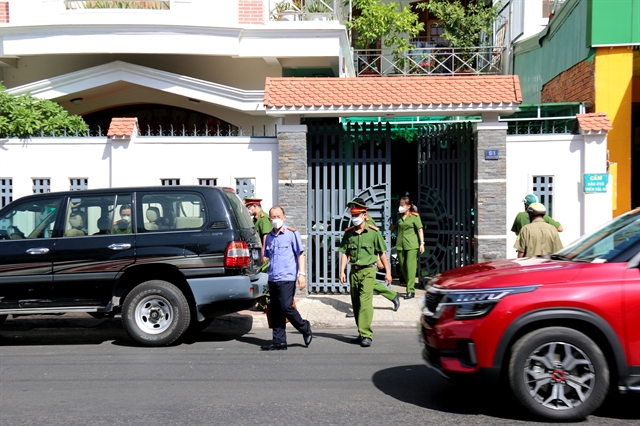 Their houses and workplaces were searched on Thursday night and Friday morning.

The project in question is the 9.26ha Tân Việt Phát 2 residential area and commercial-services project, situated on three land plots marked as No.18, 19, 20, on the two sides of Võ Nguyên Giáp, Nguyễn Thông, Phan Thiết City.

Of which, 1.5ha was planned for commercial and services buildings, 4.6ha for residential buildings, and the remaining for public areas.

The undeveloped plots were put up for auction by the local authorities in 2013 with a starting price of VNĐ111 billion (nearly US$4.9 million), with the winning bidder to carry out all developments.

But the local authorities claimed no investors took part in the auction despite numerous invitations between 2013 and 2015.

In January 2017, Tân Việt Phát JSC asked for usage rights for the land plots without going through a proper bidding process, and Hồ Lâm, the natural resources and environment department director signed the document addressed to Bình Thuận People’s Committee’s inquiring for details on the company’s proposal.

The February document noted that since the land used to be a graveyard, with many tombs waiting to be transferred, it was not attractive to investors.

The 2017 document sought the application of the 2013 asking price.

Later in February, Ngô Hiếu Toàn signed the document signifying concurrence with the department of natural resources and environment’s proposal on granting the use rights to the land plots to the company at 2013 prices.

In March the same year, Lương Văn Hải signed a decision to grant the rights of land lot No.18 for Tân Việt Phát for a 50-year lease, while lots No.19 & 20 were assigned for the company for residential and commercial purposes.

The Government Inspectorate has concluded this was against regulations.

The investigation unit of the Ministry of Public Security has launched legal proceedings against the five defendants under Article 219 of the 2015 Penal Code. — VnExpress News

Previous Time to give Kurt the boot for good
Next China’s SMIC earns record revenue in 2021, boosted by global chip shortage