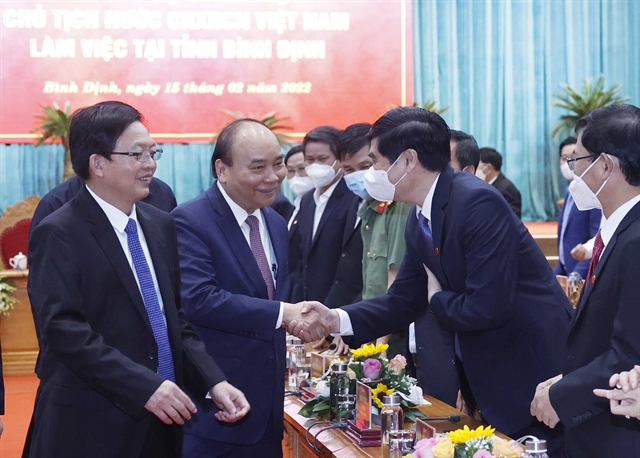 HÀ NỘI — President Nguyễn Xuân Phúc has asked Bình Định Province to make breakthroughs in socio-economic development in order to take full advantage of all its potential and strengths.

During a working session with officials of the south-central province on Tuesday, Phúc said he was impressed with the development over the past two years despite impacts caused by the COVID-19 pandemic.

The province’s gross domestic product of 2021 increased by more than 4 per cent, which was higher than that of 2020 and above the national average. The total budget revenue was reported to be nearly 40 per cent higher than the estimate, turning Bình Định into a province that can balance its budget.

Phúc said the province has a strong strategic geographical location, in the centre of the North-South road, railway, sea, and aviation routes. It is also the nearest gateway to the sea for provinces in the Central Highlands, southern Laos, and northeastern Cambodia.

In the past, Bình Định has made rapid developments, but it needs to foster the province’s stronger and more sustainable socio-economic development in the future, the President pointed out.

Phúc highlighted the resolution of the provincial Party Congress for the 2020-2025 term, which aims to achieve the average annual growth rate of 7 per cent. He also said the province should focus on breakthroughs in urban development in Quy Nhơn City and many surrounding towns for comprehensive development.

He highlighted the development of seaport logistics services and high-tech agriculture, adding that the province needed a change in attracting investment from both large and medium and small enterprises.

Planning must take into account long-term interests, Phúc said adding that the province must pay attention to developing high-quality human resources and building a transport system connecting districts in the province and neighbouring provinces.

Phúc said economic development must go hand in hand with taking care of people’s lives, especially those in site clearance.

Replying to recommendations of turning Phù Cát Airport into an international airport, the leader said ministries and sectors needed to study the scale, the mechanism, and the investment capital of the project.

Phúc agreed on the policy of expanding investment in Quy Nhơn seaport, and required the Ministry of Transport to study the Quy Nhơn – Pleiku Expressway to have more routes connecting between the central highlands and the delta provinces.

He suggested the Ministry of Agriculture and Rural Development pay attention to the province’s proposals in upgrading the capacity of irrigation reservoirs to reduce floods and ensure irrigation. He also asked the Ministry of Culture, Sports and Tourism to support the province to prepare a dossier and submit it to UNESCO to recognise Bình Định’s traditional martial arts as an intangible heritage of humanity.

Hồ Quốc Dũng, a member of the Party Central Committee, Secretary of the Provincial Party Committee, and Chairman of the provincial People’s Council said the province would strive to become the leading development province of the central region. — VnExpress News