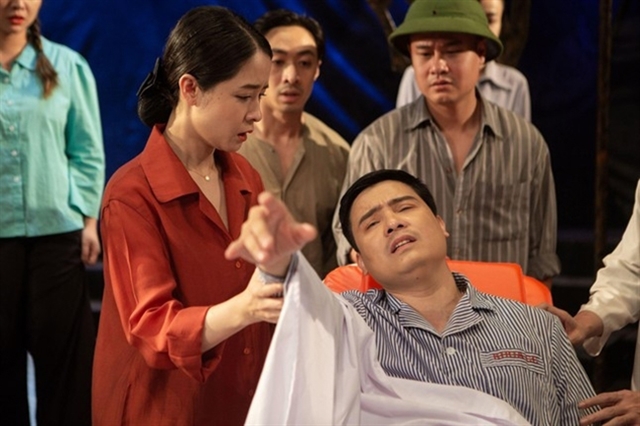 A scene in the play Làng Song Sinh of the Hà Nội Drama Theatre. The play was among the best theatre works of 2021, honoured by the Việt Nam Theatre Artists Association. Photo courtesy of Hà Nội’s Department of Culture and Sports

HÀ NỘI The best theatre artists and works of the past year have been honoured at a conference held at the Hà Nội Opera House.

The conference, granting awards to theatrical artists and productions in 2021, was organised on Monday by the Việt Nam Theatre Artists Association. The event was attended by representatives of many art units and senior artists nationwide.

Specifically, the highest prize in the category of Theatrical Performance in 2021 was given to three plays, namely Làng Song Sinh by the Hà Nội Drama Theatre, Làm Vua by the Việt Nam Tuồng Theatre and Truân Chuyên Yếm Đào by the Cải Lương Theatre of Việt Nam.

According to its chairwoman, artist Trịnh Thúy Mùi, the association was determined to fulfil its targets despite the complicated situation of the COVID-19 pandemic nationwide.

“Specifically, the association collaborated with the Nha Trang Writers Association to open a theatrical scriptwriting workshop in April 2021. Eight quality scripts were selected from the event and sent to professional art units, five of which have been performed to the public,” Mùi said.

The online contest for theatre works on the topic of COVID-19 prevention and control received more than 200 entries last year. Its organisation board awarded 38 first prizes, 24 second prizes for works and two excellent awards for individual artists in terms of directing and cinematography.

“The contest has achieved high artistic efficiency while promoting the sense of responsibility among the stage artists in the prevention of the COVID-19 pandemic,” she noted.

The association also cooperated with the culture ministry to launch major events like the week celebrating 100 years of the Việt Nam Drama Theatre (1921-2021) in Hà Nội in October, an introduction of the iconic play Chén Thuốc Độc (The Cup of Poison) or a workshop on 100 years of establishment and development of the theatre, among others.

“More training workshops for theatre artists will be held in 2022. The association will continue to collaborate with the culture ministry’s Department of Performing Arts to launch many major art events like the National Folk Opera Festival in Nghệ An Province or the International Circus Festival in Hà Nội,” Mùi revealed. VnExpress News