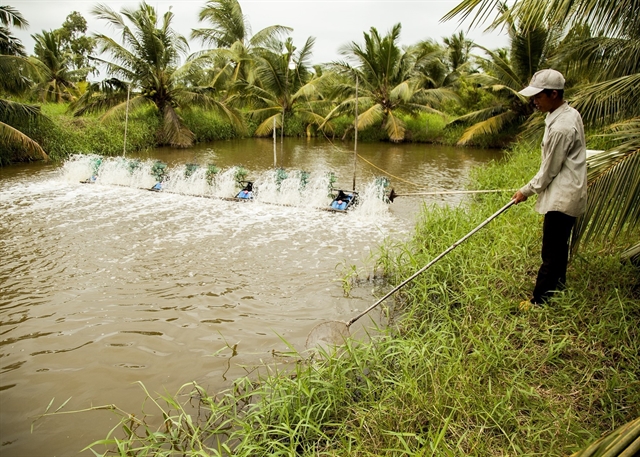 With its coastline of 65km, it is one of the delta provinces hardest hit by saltwater intrusion up rivers in recent years.

In 2019 – 20 the intrusion had a severe impact on people’s lives, farming and agricultural companies, Huỳnh Quang Đức, deputy director of the province Department of Agriculture and Rural Development, said.

Some 5,400ha of rice were damaged and 168ha of vegetables and 27,900ha of fruits were partly damaged during that dry season, and the losses were worth VNĐ1.6 trillion (US$69 million), he said.

After this the department developed various farming models to adapt to saltwater intrusion and effectively restructured agriculture.

Other models like breeding all-male giant river prawns adapted to climate change and raising cows and goats offer high incomes to farmers affected by the saltwater.

After that district authorities gave him three pregnant cows and calves each and taught him breeding techniques.

Bến Tre, the country’s largest coconut-producing province, plans to develop more organic coconut farming as the tree is resistant to saltwater and adaptive to climate change.

Đức, deputy director of the department, said the province has identified coconut as one of the key items in its agricultural restructuring programme and developed organic standards to meet the requirements of domestic and export markets.

The province has 14,000ha of organic coconut groves linked with companies that process or sell the products at home and abroad, he said.

The Thới Thạnh Agriculture Co-operative in Thạnh Phú District’s Thới Thạnh Commune has 120ha under organic coconut and sells 100,000 nuts to the local Lương Qưới Coconut Co. Ltd to produce jam for exporting to the US.

They will include 4,000ha of hi-tech farming in the three coastal districts of Bình Đại, Ba Tri and Thạnh Phú.

Half of which will adopt Vietnamese and global good agricultural practices (VietGAP and Global GAP), organic and other international standards.

Nguyễn Thành Phong, who has a 2ha farm in Thạnh Phú District’s Thạnh Hải Commune, said he gets three shrimp crops annually and earns VNĐ1.5 billion ($65,000) from each.

The use of technology offers very high incomes since the survival rate of the shrimp is up to 95 per cent, he said.

Đào Công Thương, chairman of the Thạnh Phú People’s Committee, said the district is focusing on developing hi-tech shrimp farming on a total area of 800ha.

“The model is effective and offers high quality, and shrimp can be exported to the US, Japan and the EU.”

The yield is 40 tonnes per hectare annually, 3.5 times that of intensive farming, he said.

The department has acted as a link between farmers and companies for developing value chains for shrimp production in the three coastal districts of Bình Đại, Ba Tri and Thạnh Phú.

They have a total of 2,000ha under the hi-tech shrimp farming model. VNS