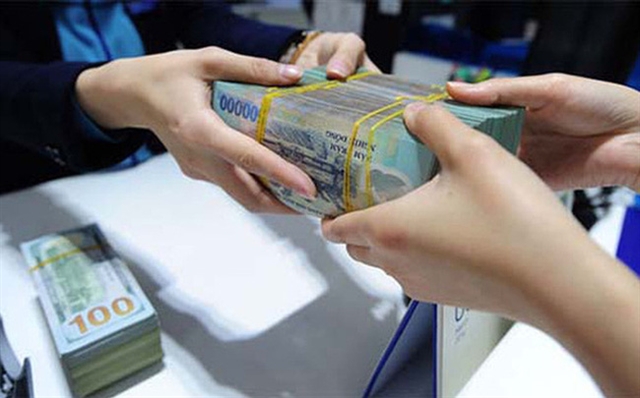 A customer deposits at a bank. Deposits of individual customers at banks by the end of November last year increased only nearly 2.63 per cent, the lowest growth rate in many years. Photo cafef.vn

HÀ NỘI — The deposit growth rate of individual customers at banks slowed last year due to the impacts of the pandemic.

According to the latest data from the State Bank of Vietnam (SBV), deposits of individual customers at banks by the end of November last year increased by just 2.63 per cent, the lowest growth rate in many years.

Deposits totalled nearly VNĐ5.28 quadrillion (US$226 billion) by the end of November, down more than VNĐ23.4 trillion against the end of October.

Experts attributed the drop in individual deposits to the strong outbreak of the COVID-19 pandemic last year which caused incomes of many individuals to reduce. At the same time, many people could not go to banks to deposit their money as many provinces and cities had to implement social distancing measures.

According to the experts, many depositors withdrew their savings to pour into more attractive investment channels amid declining deposit interest rates last year.

Saigon Commercial Joint Stock Bank (SCB) has recently applied a new interest rate since January 10 this year with increases of 0.1-0.3 percentage points per year. Notably, the highest interest rate at SCB has reached 7.6 per cent per year, but only applicable to customers depositing more than VNĐ500 billion on the term of 13 months.

For small amounts of deposits, the savings interest rates offered by SCB are also among the highest in the banking system, at 7 and 7.35 per cent per year for 12-month or more and 18-month or more deposits, respectively.

Nam A Commercial Joint Stock Bank (NamABank) is offering the second highest savings interest rate in the baking system. The bank’s rate is 7.4 per cent per year, applicable to customers depositing from 16 months or more. For terms of 12 to 15 months, the rate is also high at 7.2 per cent per year.

VPBank, for example, has introduced a new savings interest rate list for individual customers with increases on many terms, particularly for large savings amounts. The highest rate at the bank is currently 6.5 per cent per year, 0.3 percentage points higher than the previous time, applicable to customers depositing online from VNĐ50 billion on 36-month deposits. — VnExpress News