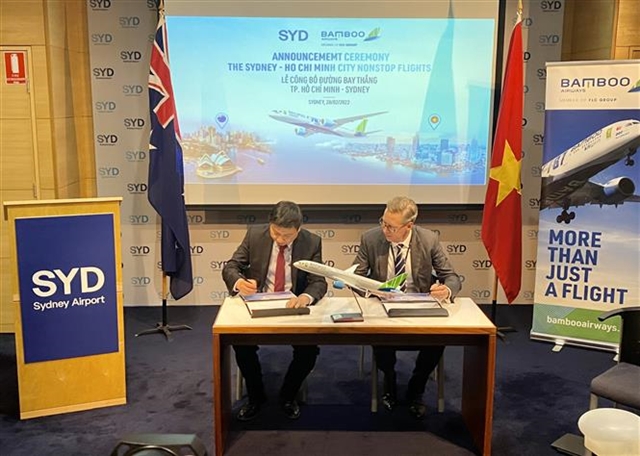 Representatives from Sydney Airport and Bamboo Airways at the signing ceremony of an MoU to launch direct flights between Sydney and Hà Nội/HCM City on Monday. — VNA/VnExpress News Photo Nguyễn Minh

SYDNEY — Vietnamese carrier Bamboo Airways announced on Monday that it will launch its direct service connecting HCM City with Sydney in Australia.

Initially, there will be two weekly return flights on Tuesdays and Fridays starting from March 29, and the number will be increased to four a week later this year.

The direct service will help cut travel time between the two cities to eight hours, down by half compared to transit flights. The modern wide-body Boeing 787-9 Dreamliner will be used for this route with utmost fuel efficiency and superb amenities and services.

On the same day, Bamboo Airways signed an agreement with Sydney airport relating to the operation of Sydney-Hanoi/HCM City non-stop flights.

Under the agreement, the two sides pledged to implement necessary activities to ensure the efficiency of the direct flights as well as promote the two countries’ images, cultural heritages, natural beauty and traditional values.

According to Geoff Culbert, chief executive of Sydney airport, enhancing the connection between the two cities is essential because Việt Nam is an extremely popular destination for Australian tourists as well as the large Vietnamese community living in Sydney.

Earlier, on February 19 and 20, Bamboo Airways launched the first non-stop flight between HCM City and Melbourne.

Australia is home to more than 300,000 Vietnamese nationals, mainly in Melbourne and Sydney, the largest and most populous cities of Australia. In 2019, the number of Australian visitors to Việt Nam reached more than 383,000, just behind the figures of tourists from the US, Russia and some other Asian countries, according to the Việt Nam National Administration of Tourism. — VnExpress News