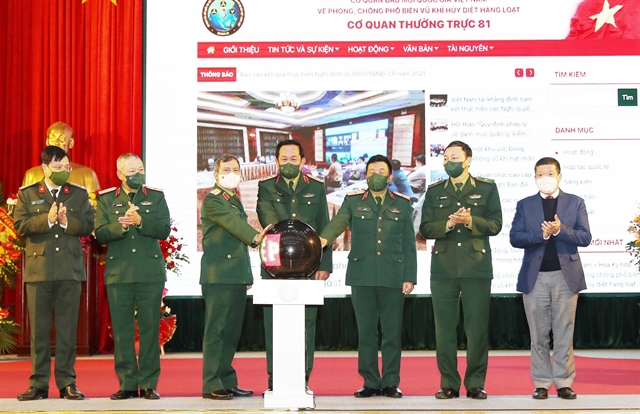 Delegates press a button to officially launch the portal on the prevention and control of WMD proliferation. —VNA/VnExpress News Photo

HÀ NỘI — The national coordinating agency for the prevention and control of the proliferation of weapons of mass destruction (WMD) convened its first meeting in Hà Nội on Tuesday.

In 2019, the Government issued Decree 81/2019/ND-CP on the prevention and control of WMD proliferation, under which the Ministry of National Defence was assigned as the national coordinating agency.

The project high command serves as the standing office of the agency to handle all matters regarding the prevention and control of WMD proliferation (also known as Standing Office 81), according to the decree.

At the meeting, Standing Office 81 launched a portal on the prevention and control of WMD proliferation.

Over the past two years, the agency worked as an advisor to the Prime Minister to design a plan for the decree, and for the defence ministry to roll out relevant documents.

The agency put into place hotlines linked with portals of the Ministry of Public Security, the State Bank of Việt Nam and other agencies while staying updated with information about the matter through the United Nations Security Council.

Efforts have been made to implement international treaties prohibiting the proliferation of WMD, as well as cooperation documents aiming to raise the capacity for detecting and responding to chemical, biological, radiological and nuclear threats.

The office has sent its staff members to online international workshops in the fight against WMD and proposed expanding international cooperation to improve response capacity.

In his remarks, Senior Lieutenant General Võ Minh Lương, Deputy Minister of National Defence and head of the agency, highlighted the good coordination within the ministry for implementing the decree.

A national agency for the work should be established with its members representing concerned ministries and agencies, he said, stressing the need to deal with bottlenecks in the legal corridor and coordination.

He asked concerned units to build plans for the decree, step up communication work, and enhance international collaboration to consolidate the legal system and improve capacity for the work. — VnExpress News