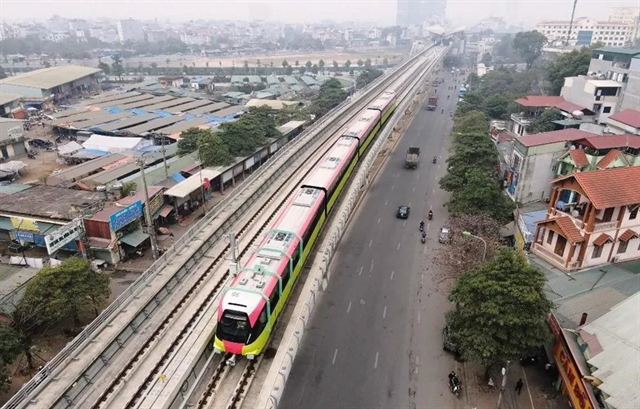 A train on the Nhổn-Hà Nội Train station metro line on a trial run in December, 2021. — VNA/VnExpress News Photo

HÀ NỘI — Hà Nội Railway One Member Company (Hanoi Metro) is recruiting 438 employees for the operation of the Nhổn-Hà Nội Station metro line, the first of its kind in Hà Nội.

The company is recruiting leaders and staff for the department of railway operation in the positions of railway dispatching supervision, railway driving coordination, electrical and environmental dispatching, operation charting and on-duty.

It also needs employees for the management of station equipment and the automatic ticketing system. Other vacancies on safety supervision and maintenance and repair and the positions of head and deputy head of Depot Nhổn also need to be filled.

The department that needs the most personnel is the station with 158 employees, Depot Nhổn with 92, equipment repair with 81, and operations with 48.

Eligible employees should be 20-45 with qualifications. Recruitment will take place from April 18 until June 30.

The employees will be trained on how to operate and maintain the railway. They will enjoy a salary ranging between VNĐ6.5-13 million per month after the metro line is officially put into operation.

The Nhổn-Hà Nội metro line needs 624 employees, of which the operation of the elevated section requires 524 staff.

Each train is designed to carry between 944 and 1,124 passengers.

The project’s investment of about VNĐ30.1 trillion (US$1.29 billion) comes from official development assistance of the French Development Agency and loans from the French Government.

The elevated section is slated for commercial operation by the end of this year, while the remaining part which is underground will be put into use in the next three years. — VnExpress News