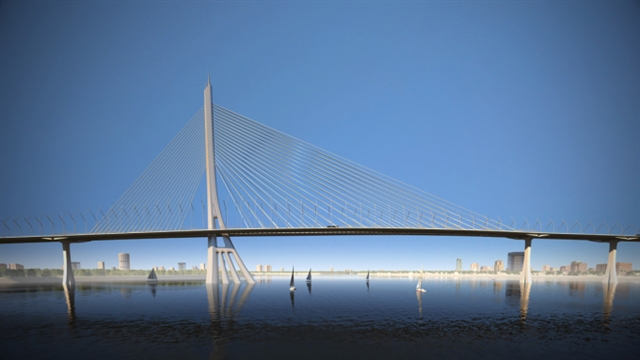 The design of the proposed cable-stayed bridge over the Soài Rạp River in HCM City between Cần Giờ and Nhà Bè districts. — Photo courtesy of HCM City’s Department of Planning and Architecture

In 2018, the Department of Planning and Architecture organised a contest to select a design for it, and it chose a cable-stayed structure with four lanes running a total length of 3.4km.

Construction is scheduled to be completed not later than 2031, and the bridge will replace the ferry, improving connectivity with Cần Giờ District helping develop its coastal tourist site.

The 2,870ha Cần Giờ Tourism Urban Area is expected to create a breakthrough in socio-economic development for the coastal district.

For many years people have been demanding a bridge since the Cát Lái Ferry is badly overloaded.

The ferry is a key link between HCM City and Đồng Nai and Bà Rịa- Vũng Tàu provinces.

The next bridge, to cost VNĐ7.2 trillion ($312 million), will be over the Đồng Nai River between HCM City’s Thủ Đức city and Đồng Nai Province’s Nhơn Trạch District.

Đồng Nai will be responsible for building the bridge while HCM City will build the approach road on its side.

Construction is slated to start at the end of 2023.

The Thủ Thiêm 4 Bridge over the Sài Gòn River will be between the intersection of Tân Thuận 2 Bridge and Nguyễn Văn Linh Boulevard in District 7 and the R4 Route in Thủ Đức.

It will be designed like a bamboo tree, a familiar sight in the country.

It is expected to ease traffic flows between the districts of Bình Thạnh, Thủ Đức, Bình Chánh, Nhà Bè, 7, and 8, and reduce accidents around ports in districts 4 and 7.

Construction is expected to start before 2028. — VnExpress News