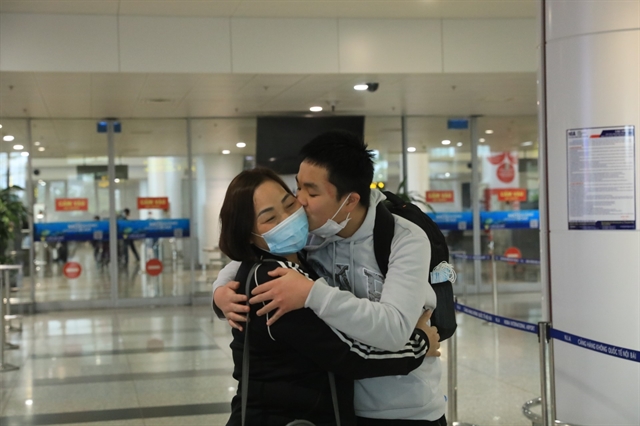 A mother welcomes back her son from Ukraine. His flight landed at Nội Bài International Airport in Hà Nội on Thursday morning, and was the third repatriation flight bringing Vietnamese citizens who fled to Romania from Ukraine. — VNA/VnExpress News Photo

HÀ NỘI — 1,200 Vietnamese people have been safely evacuated to Việt Nam from conflict-hit Ukraine on six repatriation flights so far, the Ministry of Foreign Affairs announced at a press briefing on Thursday.

Responding to reporters’ queries on some alleged issues with regards to citizen protection efforts in Ukraine, spokesperson for the ministry Lê Thị Thu Hằng stressed the safeguarding of security, and safety of lives and properties of Vietnamese citizens in Ukraine, is the highest priority of the Vietnamese Communist Party, State, and Government.

As soon as tense developments surrounding the situation in Ukraine appeared, Prime Minister Phạm Minh Chính on February 26 issued Official Letter 201, touching on the protection of Vietnamese citizens and legal entities and a number of issues of concern.

Minister of Foreign Affairs Bùi Thanh Sơn has held a series of phone calls with his counterparts in Russia, Ukraine, Romania, and handed over letters to the Polish Foreign Minister. Meetings have also been held with relevant countries’ ambassadors in Việt Nam to request support and obtain commitments guaranteeing maximum security and safety for Vietnamese citizens and their families. These efforts have created the conditions for Vietnamese citizens and their families to evacuate, as well as the facilitation of repatriation flights.

Spokesperson Hằng affirmed that in the context of the rapidly evolving and complicated situation in Ukraine and surrounding countries, Vietnamese ministries and representative agencies in the region have made great efforts to urgently arrange repatriation flights to bring Vietnamese people and their families back home, as well as provide support to resolve problems, ensuring transparency with the priority on the elderly, children, pregnant women and persons with disabilities.

During the process, Hằng noted that there were cases where people, who originally wished and had registered to return to Việt Nam, changed their mind and instead choose another way and place of evacuation, or wanted to stay in anticipation of returning to Ukraine when the war ends. In some other cases, people might not have the required documentation and need assistance from representative missions.

The Vietnamese representative agencies have made great efforts, working closely with the host authorities and local Vietnamese associations to overcome difficulties, continuously providing updated information in a timely manner, evacuating people from the war zone and bringing them home.

Hằng underlined that the endeavours of domestic authorities, along with Vietnamese representative missions abroad, airlines, and businesses who have volunteered to sponsor the repatriation flights, are highly appreciated by Vietnamese residing overseas, as well as their relatives in the country.

Prior to the war, there are about 7,000 Vietnamese living in Ukraine, mostly in Kyiv, Kharkiv, and Odesa. — VnExpress News